I want to go to Medevil Times (the resturant.)

While I stating at the hotel for the wake, I happen to pick up a brochure for Medieval Times. For those of you that don't know, Medieval Times is a theme restaurant. Or maybe more like a dinner theater. Basically you sit in a giant arena and watch a bunch of guys in medieval dress duke in out in the ring while eating food straight out of the state fair.

Why do I want to go to this over priced tackstravaganzia? Three reasons.
1. I love horses. I would never own one, because I am poor cheap and lazy, but that doesn't mean I don't want to watch them do entertaining things for an hour or so.


2. The men in the brochure are attractive. Meow. Also the king kinda looks like Sean Connery. 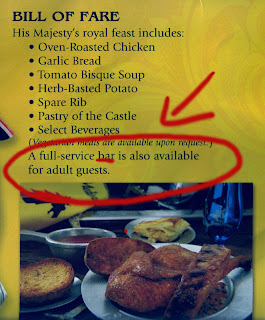 The only way this would be better is if they had a dragon. I would pay extra to see that. I mean how can you not want to go see this? There's greasy food, beer, and a high possibly of injury. This should be an American pastime. How can you not love a theme restaurant where underpaid attractive men ride around on horses and smack each other with sticks? I'll bet you there aren't many men in that audience.
Someday I will go to a Medieval Times, and I will get drunk, and it will be awesome. Someday.
Posted by Queen Holly the Magnificent at 9:43 AM