The Retaining Wall is Slowly Murdering Me.

We had to stop working on it. Our bodies gave out. I hit that point where I had to give myself a pep talk every single time I went to pick up a rock. You know, the heaviest rocks I can conceivably lift. Those rocks*. I mean just look at the amount of work we got done. 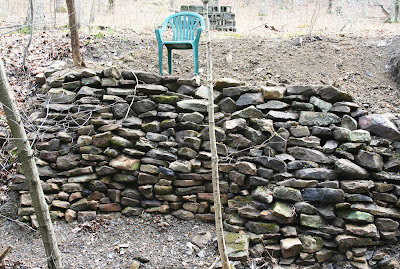 Yes, that is a full scale lawn chair. In case you were wondering. Also, at some point during this ordeal Scott did some more math and figured out that we did not have enough weight. Do you know how you add weight to the wall? More rocks, Ha ha ha, how ever did you guess?
So I'm a little bitter.
I never thought that I would find myself identifying with Boxer from animal farm and his 'I will work harder' mantra. But this retaining wall is taking everything I've got and then some. I hit some sort of wall yesterday where we both decided that we couldn't do this anymore.
With the wall growing in height, it became impossible to use creekside rocks, which meant only one thing, we were headed for the rock bar. For those of you that don't know, a rock bar is a big strip of rocks that lay on the surface. They can be treacherous to walk in because most of the rocks are huge and the smaller rocks are kind of wedged between them. So we had the fun take of grabbing these motherfucking huge ass rocks and waddling through possibly shifting footing to the pickup. Yay.
For every two or three rock trips we would alternate with a fill load of dirt that King (the backhoe) had dug up for us 'cause he's cool like that. Because there is nothing better for your back then lifting heavy shit and then digging a whole bunch.
Kill me.
Any who, I feel like I have been fighting the landscape. And that the landscape was fighting dirty by slapping us with 80 degree temperatures in motherfucking March. WTF Nature?
Seriously WTF?
Nature was all like, 'oh you want to work outside all day? Well fuck that shit, BAM eighty degrees bitches, take that cocksuckers!'
And then we were all 'why nature, what have we ever done to you?'
And then nature flipped us off.
Yeah that's pretty much how it went down.
* I can not stress this enough.